The 0 AD EMPIRES AT WAR, RISE OF ROME CAMPAIGN Is almost ready, Check all these pictures out. 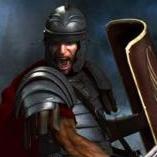 By Belisarius17,
April 20 in General Discussion